Gurney’s short recollection of his teacher was provided for a series of pieces on Stanford by his pupils convened following Stanford’s death in 1924. Gurney’s is a quirky, characterful piece; full of deep admiration and insight, placing Stanford in the full context of past and future; but it tells as much about Gurney as Stanford. Gurney lays high praise at Stanford’s feet in calling him a ‘born poet’. Stanford thought Gurney to be perhaps the greatest genius he had taught, but declared him to be the least teachable. The recollection was published in the journal ‘Music & Letters’ (Oxford University Press) in July 1924 (vol.5, no.3, p.200). 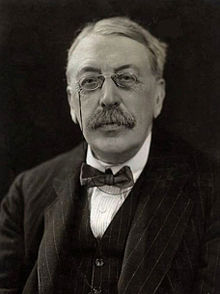 He was a stiff master, though a very kind man; difficult to please, but most glad to be pleased. England will bury many in the Abbey of Westminster much lesser than he.

By him the German influence was defeated, and yet had good learnt of it. He was a born poet, but had to overcome foreign form and influence. He wrote oratorio instead of string quartet, violin sonata, and such. When England is less foolish she will think more of him. Had he been wiser, he would have talked of Elizabethans at his lessons instead of the lesser string quartets of Beethoven, or the yet deader things that industry and not conscience got out of the German masters.

As for his work in Irish folksong arrangements, so admirable, and his autobiographical books, stiff yet charming, the first will last long, the second not long, but will amuse worthily. Only fools will deny that he brought to them that Irish music, the best in the world, then, of known folksongs.