Gurney saw his original work as a composer to be his most important: as he wrote, ‘the brighter visions brought music; the lesser poetry or mere pleasurable emotion’. He was enormously prolific, particularly in the field of song for which he is best known.

For a list of currently available recordings and published scores, see the Current Bibliography. 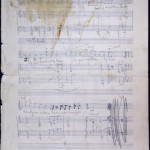 The manuscript of one of Gurney’s most important songs: a setting of words from John Masefield’s play,The Tragedy of Pompey the Great, ‘By a Bierside’. Gurney composed the song in 1916 whilst serving as a private soldier with the 2/5 Gloucesters. It was written whilst lying on a damp sandbag in a disused trench mortar emplacement in Flanders. The mud staining to this first page suggests that this is that first manuscript of the song.
(Image © copyright the Ivor Gurney Estate)

The Songs of Ivor Gurney

Gurney composed some 330 songs, about 90 of which have been published. It is in this genre that Gurney’s genius has been most widely recognised, his particular sensitivity to the poetry he set arising from his dual ability as both composer and poet.
Below are a few 30 second extracts from Gurney’s songs taken from the latest release by Naxos Records, vol. 19 of their English Song Series,Ivor Gurney: Songs. You can buy this recording from the Society Shop or through Amazon.co.uk. Our thanks to Naxos for permission to make these extracts available on this site.

This setting of Hilaire Belloc’s Ha’nacker Mill, composed in 1919, is an elegy to a place Belloc knew in his youth, a mill at Halnaker hill near Slidon in Sussex. When revisiting the place in later life it was in desolation, and this poem sees its decay as symptomatic of the wider demise of English agriculture in a post-industrial world.

Under the Greenwood Tree

This song is from Gurney’s early masterpiece, the Five Elizabethan Songs, in which set Gurney’s most popular song is also found, ‘Sleep’.

Gurney composed numerous miniatures for piano, as well as four known sonatas, the last of which is now missing. However, much of his effort in writing for the piano was put into Preludes. He composed at least 17 preludes, five of which – Gurney’s ‘Set one’ – were published by Winthrop Rogers in 1921. One manuscript in the Gurney Archive contains the beginnings of ‘Set Three’, implying that Set Two must have been written, either as a now missing whole or in the collation of the various preludes composed between those of sets one (1919) and three (c.1921). From Gurney’s wartime correspondence it appears that Gurney was intent upon composing a collection of ‘English Preludes’, being perhaps his answer to Bach’sDas Wohltemperierte Clavier– the Forty-Eight Preludes and Fugues.

The Gurney Society oversaw the publication by Thames Publishing (now part of Music Sales) of Gurney’s two early Nocturnes and nine preludes, all of which are recorded and available on CD.

It is hoped that audio samples from these recordings will be made available here shortly.

Some of these will shortly be available from the Society Shop

While Gurney is known principally for his songs, he considered chamber music to be an important part of his output – particularly in his later life – although these works are to a great extent missing, either in whole or in part. This amounted to some twenty string quartets, thirteen violin sonatas, quintets, and other works, including numerous miniatures for violin.

Two short violin works were published posthumously in 1940 – ‘The Apple Orchard’ and ‘Scherzo’ (OUP, 1940 – recorded by David Fruwirth on the Avie label). Work is being undertaken on what material is extant. As a result of this Gurney’s E flat violin sonata has been brought to performance and is to be released on CD in 2013, and it is hoped that a string quartet might be recorded sometime soon.

Gurney completed several choral works. While some are known to be lost, such as the Mass setting he was composing in 1919, others are extant in manuscript, which works are being carefully assessed by the Gurney Trust and, where desirable, edited for possible performance.

The works so far edited and potentially available for performance are:

Whilst not hugely individual, musically, Gurney’s single chant for Psalm 23, written whilst studying at the Royal College of Music, is significant in that Gurney sang the psalm to himself, using his own chant, to steady his nerves when under fire in the trenches at Fauquissart during the First World War.

The poetry of Edward Thomas was a huge influence on Gurney, most notably on Gurney’s poetry. He also composed some 20 settings of Thomas – mostly solo songs but also this choral work.

Thomas’s ‘The Trumpet’ later bore fruit in a solo song, composed in July 1925 and published in 1926 as part of the cycleLights Out, but this earlier setting, probably dating from around 1921, is by far the more successful setting of these words.

The extant score is with piano accompaniment, although it is evident from the manner of the accompaniment that the work was intended to be with orchestra. Philip Lancaster undertook the orchestration of the work in 2008. The work was premiered in its original piano version as part of the 2007 English Choral Experience at Abbey Dore, conducted by Paul Spicer. The orchestrated version was first performed in July 2008 as part of the Cumbria Choral Initiative, conducted by Ian Jones, and was given its second outing during the 2010 Three Choirs Festival.The Trumpetwill receive its US premiere at the University of New Hampshire on 11 October 2012, conducted by William Kempster. We are hoping that the work will be recorded (with orchestra) during 2013.

Composed in June 1925, this motet for double choir is an apparently deeply personal work for Gurney. The poem by Robert Bridges speaks honestly of the poet’s ambivalent relationship with God: he undoubtedly believes in God, but neither he nor anyone else can know or understand him. For Gurney, who had cried angrily out on God in poems of both the trenches (‘Pain’) and the asylum (‘To God’) such a stance seems to ring true with him. The latter part of the poem may particularly have caught Gurney’s attention: he ‘whose spirit within [him…] loveth beauty’, ‘gratefully adoring for delight beyond asking’; and while Bridges is cherishing his freedom of belief, Gurney, in his ‘hours of anguish and darkness’, may also be cherishing at least the idea of freedom, from the mental hospital in which he was becoming resigned to his hopeless abandonment.

While it is possible that the work was ‘tried through’ in the autumn of 1925 by the choir of Christ Church Oxford (such a thing was mooted, although there is no evidence that it happened), the work was given its modern premiere in Gloucester Cathedral in May 2012 as part of the Gurney Society’s Spring Weekend, given by Gloucester Cathedral Choir under its director Adrian Partington. Amongst occasional appearances as part of the Choir’s extensive repertoire for daily services at the Cathedral, the motet will be performed during one of the services of evensong in the 2013 Three Choirs Festival.

Only three of Gurney’s orchestral works are extant, the scores of the two symphonies we know Gurney was working on, one of which we know to have been completed in short score, now being lost. Between 2006 and 2011 Philip Lancaster and Ian Venables, on behalf of the Ivor Gurney Estate, prepared editions of the three extant works for performance and recording.

The extant works are as follows:

Composed in response to a competition run by the Worshipful Company of Musicians for a march to be performed at the forthcoming celebrations of the coronation of George V, this march began life as a March in B flat, before being retitled on its orchestration in January 1911. In the event no prize was awarded.

Gurney’s march received its first performance conducted by Adrian Partington in Gloucester Cathedral in June 2011 – just over a century after the work was completed. We are hoping that the work will be recorded during 2013.

Written in November 1920, at around the time of the interment of the Unknown Warrior at Westminster Abbey and the unveiling of the Cenotaph, Gurney gradually settled on the titleWar Elegyhaving initially christened it ‘Funeral March’ and then ‘March Elegy’. It was given its first performance at the Royal College of Music in 1921, in one of their Patron’s Fund concerts – probably under the baton of the young Adrian Boult – after which it remained in the RCM archives until it was found in the 1990s.

The work was recorded by the BBC Symphony Orchestra in 2006, and is available on CD from Dutton records.

Gurney reported having sketches of hisA Gloucestershire Rhapsodyin hand in March 1919, but it took another two years for the work to be completed, in March 1921. It is a work that epitomises Gurney’s unique view of landscape and his passion for his native Gloucestershire landscape.

As Gurney’s most important extant orchestral work, and one which he cited as amongst his works in biographies issued during his lifetime, it finally received its first performance during the 2010 Three Choirs Festival, in Cheltenham Town Hall, given by the Philharmonia Orchestra conducted by Martyn Brabbins. In late August 2012 the work was recorded by the BBC Scottish Symphony Orchestra conducted by David Parry for broadcast on Radio 3 in the autumn of 2012.