Gurney wrote some 1,500 poems between 1913 and 1926, many of which are as yet unpublished. A complete edition is currently in preparation for Oxford University Press.

Click on the tabs above to view a selection of his poetry written during and shortly after the First World War. For a list of volumes currently available, see the Current Bibliography. 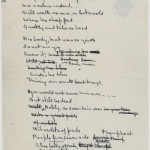 The manuscript of Gurney’s poem ‘To His Love’ (January 1917).
(Image © copyright the Ivor Gurney Estate)

Little did I dream, England, that you bore me
Under the Cotswold Hills beside the water meadows,
To do you dreadful service, here, beyond your borders
And your enfolding seas.

I was a dreamer ever, and bound to your dear service
Meditating deep, I thought on your secret beauty.
As through a child’s face one may see the clear spirit
Miraculously shining.

Your hills not only hills, but friends of mine and kindly,
Your tiny orchard-knolls hidden beside the river
Muddy and strongly flowing, with sky and tiny streamlets
Safe in its bosom.

Now these are memories only, and yout skies and rushy sky-pools
Fragile mirrors easily broken by moving airs
But deep in my heart for ever goes on your daily being
And uses consecrate.

Think on me too, O Mother, who wrest my soul to serve you
In strange ways and fearful beyond your encircling waters
None but you can know my heart, its tears and sacrifice
None, but you, repay.

Bach and the Sentry

Watching the dark my spirit rose in flood
On that most dearest Prelude of my delight
The low lying mist lifted its hood,
The October stars showed nobly in clear night.

When I return, and to real music-making,
And play that Prelude, how will it happen them?
Shall I feel as I felt, a sentry hardly waking,
With a dull sense of No Man’s Land again?

He’s gone, and all our plans
Are useless indeed.
We’ll walk no more on Cotswold
Where the sheep feed
Quietly and take no heed.

His body that was so quick
Is not as you
Knew it, on Severn river
Under the blue
Driving our small boat through.

You would not know him now…
But still he died
Nobly, so cover him over
With violets of pride
Purple from Severn side.

Cover him, cover him soon!
And with thick-set
Masses of memoried flowers –
Hide that red wet
Thing I must somehow forget.

Written at St. Albans in July 1918, and dedicated ‘To the Memory of Edward Thomas’.

A tall lean man he was, proud of his gun,
Of his garden, and small fruit trees every one
Knowing all weather signs, the flight of birds,
Farther than I could hear the falling thirds
Of the first cuckoo. Able at digging, he
Smoked his pipe ever, furiously, contentedly,
Full of old country tales his memory was;
Yarns of both sea and land, full of wise saws
In rough fine speech; sayings his father had,
That worked a twelve-hour day when but a lad.
Handy with timber, nothing came amiss
To his quick skill; and all the mysteries
Of sail-making, net-making, boat-building were his.
That dark face lit with bright bird-eyes, his stride
Manner most friendly courteous, stubborn pride,
I shall not forget, not yet his patience
With me, unapt, though many a far league hence
I’ll travel for many a year, nor ever find
A winter-night companion more to my mind,
Nor one more wise in ways of Severn river,
Though her villages I search for ever and ever.

Written at Warrington in July 1918.

The early dew was still untrodden,
Flawless it lay on flower and blade,
The last caress of night’s cold fragrance
A freshness in the young day made.

The velvet and the silver floor
Of the orchard-close was gold inlaid
With spears and streaks of early sunlight –
Such beauty makes men half afraid.

An old man at his heap of stones
Turned as I neared his clinking hammer,
Part of the earth he seemed, the trees,
The sky, the twelve-hour heat of summer.

“Fine marnen, zür!” And the earth spoke
From his mouth, as if the field dark red
On our right hand had greeted me
With words, that grew tall grain instead.

Oh, years ago, and near forgot!
Yet, as I walked the Flemish way,
An hour gone, England spoke to me
As clear of speech as on that day;

Since peasants by the roadway working
Hailed us in tones uncouth, and one
Turned his face toward the marching column,
Fronted, took gladness from the sun.

And straight my mind was set on singing
For memory of wrinkled face,
Orchards untrodden, far to travel,
Sweet to find in my own place.

Written at St. Albans in September 1918.

Like softly clanging cymbals were
Plane-trees, poplars Autumn had
Arrayed in gloriously sad
Garments of beauty wind-astir;
It was the day of all the dead –

Toussaints. In sombre twos and threes
Between those coloured pillars went
Drab mourners. Full of presences
The air seemed . . . ever and anon rent
By slow bell’s solemnities.

The past year’s gloriously dead
Came, folk dear to that rich earth
Had given them sustenance and birth,
Breath and dreams and daily bread,
Took labour-sweat, returned them mirth.

Merville across the plain gleamed white,
The thronged still air gave never a sound,
Only, monotonous untoned
The bell of grief and lost delight.
Gay leaves slow fluttered to the ground.

Sudden, that sense of peace and prayer
Like vapour faded. Round the bend
Swung lines of khaki without end . . . .
Common was water, earth and air;
Death seemed a hard thing not to mend.

Only the wanderer
Knows England’s graces,
Or can anew see clear
Familiar faces.

And who loves joy as he
That dwells in shadows?
Do not forget me quite,
O Severn meadows.

Pain, pain continual, pain unending;
Hard even to the roughest, but to those
Hungry for beauty . . . . Not the wisest knows,
Nor the most pitiful-hearted, what the wending
Of one hour’s way meant. Grey monotony lending
Weight to the grey skies, grey mud where goes
An army of grey bedrenched scarecrows in rows
Careless at last of cruellest Fate-sending.
Seeing the pitiful eyes of men foredone,
Or horses shot, too tired merely to stir,
Dying in shell-holes both, slain by the mud.
Men broken, shrieking even to hear a gun. –
Till pain grinds down, or lethargy numbs her,
The amazed heart cries angrily out on God.

The proud and sturdy horses
Gather their willing forces,
Unswerving make their courses
Over the brown
Earth that was mowing meadow
A month agone, where shadow
And light on the tall grasses
Quivered and was gone.

They spoil the nest of plover
And lark, turn up, uncover
The bones of many a lover
Unfamed in tales;
Arrows, old flints of hammers,
The rooks with hungry clamours
Hover around and settle
Seeking full meals.

Who knows what splendid story
Lies here, what hidden glory
Of brave defeat or victory
This earth might show.
None cares; the surging horses
Gather untiring forces
The keen-eyed farmer after
Guiding the plough.

Written sometime between December 1918 and February 1919, shortly after Gurney’s return to civilian life.

High over London
Victory floats
And high, high, high,
Harsh bugle notes
Rend and embronze the air.
Triumph is there
With sombre sunbeams mixed of Autumn rare.
Over and over the loud brass makes its cry,
Summons to exultancy
Of past in Victory.
Yet in the gray street women void of grace
Chatter of trifles,
Hurry to barter, wander aimlessly
The heedless town,
Men lose their souls in care of business,
As men had not been mown
Like corn swathes East of Ypres or the Somme
Never again home
Or beauty most beloved to see, for that
London Town might still be busy at
Its sordid cares
Traffic of wares.
O Town, O Town
In soldiers’ faces one might see the fear
That once again they should be called to bear
Arms, and to save England from her own.

This poem was first published in The Guardian in November 2010.
Please note that this poem is © copyright the Ivor Gurney Estate.

Written in June-July 1916, originally under the title ‘For the Fallen (E.S.).

E.S. and J.H. are Privates Ernest Skillern and John Hall, who served alongside Gurney in the 2/5 Gloucesters, and who were killed in action on 20th and 21st June, respectively. Photographs of their graves at Laventie, in the Royal Irish Rifles graveyard, are reproduced below the poem, courtesy of R.K.R. Thornton.

Living we loved you, yet withheld our praises
Before your faces;

And though we had your spirits high in honour,
After the English manner

We said no word. Yet, as such comrades would,
You understood.

Such friendship is not touched by death’s disaster,
But stands the faster;

And all the shocks and trials of time cannot
Shake it one jot.

Beside the fire at night some far December
We shall remember

And tell men, unbegotten as yet, the story
Of your sad glory –

Of your plain strength, your truth of heart, your splendid
Coolness, all ended!

All ended, . . . yet the aching hearts of lovers
Joy overcovers,

Glad in their sorrow; hoping that if they must
Come to the dust,

An ending such as yours may be their portion,
And great good fortune –

That if we may not live to serve in peace
England, watching increase –

Then death with you, honoured and swift, and high;
And so – Not Die